As the election campaign for the next government officially gets underway what did we miss in the dying days of the last one?

The end of last week saw frenzied activity to clear the decks before the dissolution of parliament. Here are three things I picked out:

That was the accusation from Labour’s Chris Ruane as he raised a point of order with the speaker about why it had taken almost five months to answer a written question he had tabled in early November about how much money was spent on social housing in each of the last 15 years. The speaker said he was ‘taken aback’ by the delay and that ministers must do better.

Here’s the reply that Ruane (finally) received from the most recent of the 22 housing ministers. Brandon Lewis gave him affordable housing expenditure for the last 15 years, arguing that ‘expenditure is a more accurate relfection of resources used to deliver affordable housing as budgets can and do fluctuate during the year.

Here are the figures he gave in graph form: 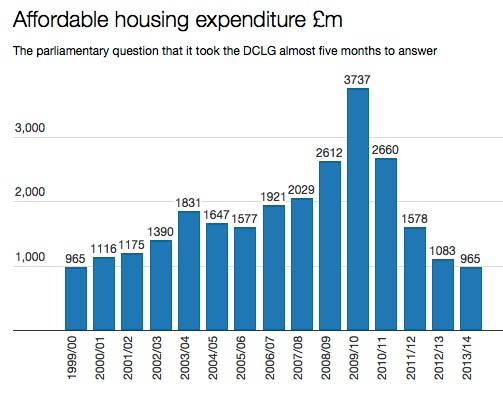 The answer does not say but I’m assuming these are for England only and are in 2013/14 prices. What’s interesting is that by 2013/14 the coalition had taken expenditure on affordable housing back to square one: to the level it was in 1999/00, just after the Labour government had stuck to two years of Conservative spending plans that included draconian cuts in housing investment.

The figures are not new – just look in the latest UK Housing Review – but coming from Brandon Lewis they are somewhat at odds with the standard coalition arguments he makes next:

I wonder what possible reason there could be for delaying this answer until the dying days of the last parliament.

The final day of parliament is also the time for valedictory speeches by MPs who are leaving the Commons.

This time they included three former housing ministers. Nothing very noteworthy about that, you might think. After all, we’ve had 22 of them since 1979 and 15 since I started writing about housing, so it all becomes a bit of a blur. However, these three deserve to be mentioned.

First up was Sir George Young. He is certainly the best Conservative housing minister in those years and arguably the best from any party. Unjustly maligned for his comment about homeless people and the opera (he was being ironic), he presided over a large increase in the budget for new social housing following the housing market crash. He also had this to say in the debate on Thursday:

‘As a former housing minister, I hope that housing will be an important issue in the campaign, as we need to build more houses than were built under either of the last two administrations if every family is to have a decent home.’

Next up was Sir John Stanley, very much at the opposite end of my league table to Sir George, but responsible for the most far-reaching change seen in that time. As he reminded the House, he was the housing minister responsible for the right to buy Housing Bill in 1979.

And finally came Nick Raynsford, another contender for best minister of the last 35 years and an influential campaigner on housing and homelessness issues before he became an MP. He became the Labour housing minister at a time when the party had taken its eye off the ball and cut funding for new social housing in line with inherited spending plans. However, I remember him for his involvement in the release of capital receipts, Decent Homes and the reinstatement of the homelessness legislation that he had campaigned for before becoming an MP.

The contrast could hardly have been stronger with the last but one housing minister, Kris Hopkins. He retained responsibility for homelessness when he was reshuffled last year and took the chance of the last day of term to issue a glowing written statement about the government’s record. He wasn’t the only DCLG minister to do this. A similarly boastful statement by his boss Eric Pickles about housing and planning delivery followed. And the decks were cleared with a series of announcements in the last few days of the government. Three Bills with a housing impact got Royal Assent on Friday. The government’s response to the consultation to the small sites exemption to zero carbon homes emerged on Friday and rules for the  affordable housing debt guarantee were published on Saturday.

‘Our investment, backed by one of the strongest legislative safety nets in the world, ensures that no family should ever be without a roof over their heads and that vulnerable people facing a housing crisis receive support.’

Or at least it did until you looked at the homelessness figures for the final quarter of 2014 published by his own department at on the same day. It’s bad enough that all the key indicators on homelessness and temporary accommodation seem to be moving in the wrong direction. Daniel Douglas reported on this for Inside Housing here.

Most telling of all is a huge increase in the number of families with children in bed and breakfast accommodation beyond the six-week legal limit. This was up 55 per cent on the previous quarter and 55 per cent on a year ago and is now back to the dire levels of 2012 and 2013 that prompted dire warnings about councils breaking the law from the then housing minister. He’s the one now running the Conservatives’ election campaign.

Originally published on Inside Edge 2, my blog for Inside Housing