Originally posted on December 28 as a column for Inside Housing.

The second part of my look back at the year runs from land to Brexit via renting and council housing. Part one is here.

If 2018 was the year of the tenant, then another issue was not far behind as the land question took on an importance arguably not seen since before the First World War.

A developing political consensus around the potential of land value capture as a funding mechanism for infrastructure and affordable housing found expression in a favourable report from the all-party Housing, Communities and Local Government Committee and an open letter signed by former Downing Street insiders and think tanks and organisations across the political spectrum. One report put the net profit made by landowners just for getting planning permission for housing at a cool £13 bn a year.

At the same time the chancellor appointed former Cabinet minister Sir Oliver Letwin to lead out an independent review of the slow pace at which homes get built. Letwin quickly focussed on slow-build out rates on large sites but concluded that the reason why they take an average of more than 15 years to complete has less to do with landbanking (hoarding land with planning permission) than the absorption rate (the fact that developers only build as fast as they can sell for a required profit in local markets).

END_OF_DOCUMENT_TOKEN_TO_BE_REPLACED

Originally published as a column for Inside Housing on December 21.

It was the year of three housing ministers and two secretaries of states (so far), the year that the department went back to being a ministry and a new government agency promised to ‘disrupt’ the housing market.

It was also the year of the social housing green paper and the end of the borrowing cap, of Sir Oliver Letwin and Lord Porter and of some significant anniversaries.

Above all, it was the year after Grenfell and the year before Brexit. Here is the first of my two-part review of what I was writing about in 2018.

END_OF_DOCUMENT_TOKEN_TO_BE_REPLACED

The best housing books of 2018

Originally published as a column for Inside Housing on December 17.

As housing has risen up the political and media agendas, so the shelves are filling with books explaining where we’ve gone wrong and what we could do to put things right.

Reflecting that, and just in time for anyone wondering what to get the housing nerd in their life for Christmas, here are my three housing books of the year. 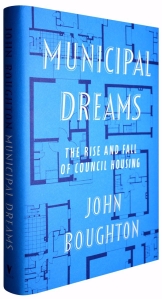 First up is John Boughton’s indispensable history of council housing, Municipal Dreams – The Rise and Fall of Council Housing.

It’s a predictable choice and one already made by many other reviewers but it is one that is better late than never and one that will be even more worth reading next year against the background of the centenary of Homes Fit for Heroes.

END_OF_DOCUMENT_TOKEN_TO_BE_REPLACED

Originally posted on my blog for Inside Housing on December 11.

As Westminster grinds to a halt over Brexit at least some progress is still being made on housing – or is it?

In the year of the social housing green paper and the end of the borrowing cap, some things have undoubtedly moved but the signs at Housing Communities and Local Government questions on Monday were that others are grinding to a halt.

First up was the land question and specifically the way that MHCLG dashed hopes of radical reform of land value capture in its response to a Housing Communities and Local Government Committee report recommending big changes to a system that sees planning permission for housing increase the value of agricultural land by 100 times.

END_OF_DOCUMENT_TOKEN_TO_BE_REPLACED

Originally posted on December 4 on my blog for Inside Housing.

Go back to the days when the government’s confidence in its marketising agenda for social housing was at its greatest and one consistent justification was made by ministers for their policies.

The introduction of affordable rent would mean more new homes for the same money, fixed-term tenancies in the Localism Act would ‘end the lazy consensus’ and free up more lettings for people on the waiting list and Welfare Reform Act measures to remove the spare room subsidy would free up larger properties for overcrowded families.

Figures released last week show the combined impact of the policies and the results are not pretty. END_OF_DOCUMENT_TOKEN_TO_BE_REPLACED