Originally posted on my blog for Inside Housing on January 25.

More of us now rent from a private landlord than at any time since the first man walked on the moon.

Figures in the 2016/17 English Housing Survey published on Thursday show yet another rise in the proportion of households renting from a private landlord and decline in home ownership.

More than 20% of us are now private renters, the highest figure in any year since 1969, the year of Woodstock and one small step for man.

The proportion of households who own outright rose again to 34.1% while the proportion buying with a mortgage fell to just 28.4%.

To put that second figure in perspective, throughout the 1990s more than 40% of us were buying with a mortgage.

Social renting remained stable at just over 17% of households, but with the local authority share of that falling again. 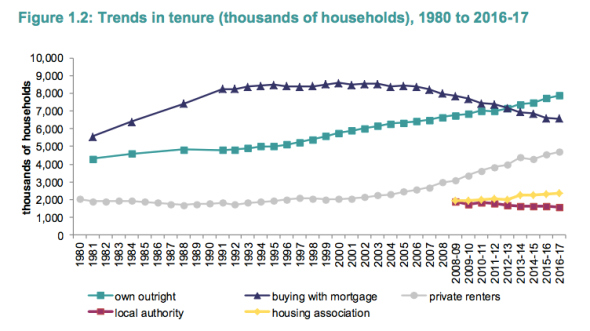 END_OF_DOCUMENT_TOKEN_TO_BE_REPLACED

Originally posted on my blog for Inside Housing on January 23.

It’s got a new name and new ministers but how much has really changed at the Ministry for Housing, Communities and Local Government?

Yesterday’s MCHLG questions marked the first time that Sajid Javid and his new team have faced MPs since the reshuffle earlier this month.

Judging from the secretary of state’s first few responses, the answer seemed to be not much.

His exchanges with his Labour shadow John Healey over the painfully slow progress on replacing unsafe tower block cladding have already been widely reported.

On the latest figures, 312 buildings have been tested and 299 have been failed but cladding has been taken down and replaced on just three.

‘How has it come to this?’ asked Healey. ‘Seven months on from Grenfell, only one in four families who are Grenfell survivors has a new permanent home. The Government still cannot confirm how many other tower blocks across the country are unsafe. Ministers still refuse to help to fund essential fire safety work when they know that blocks are dangerous.’

END_OF_DOCUMENT_TOKEN_TO_BE_REPLACED

Lessons from the collapse of Carillion

Originally posted on my blog for Inside Housing on January 16.

On the face of it, housing seems set to escape relatively unscathed from the crisis at Carillion but there are still some important lessons to be learned.

The construction and outsourcing firm that sounds more like a heavy metal band went into liquidation on Monday leaving £1.5 billion owed to the banks, 19,000 workers facing an uncertain future and a £600 million hole in its pension fund.

That’s before we get to the egg on the faces of ministers who continued to award it lucrative contracts despite clear warning signs about its future, the controversy about executive pay and dividends and the awful knock-on effects on smaller companies and workers in the supply chain owed money that may not get paid at all.

END_OF_DOCUMENT_TOKEN_TO_BE_REPLACED

Return of the housing ministry

Originally published as a column for Inside Housing on January 10.

What’s in a name? Only time will tell how important the change of departmental moniker will be but it was surely the minimum that Theresa May needed to do to show that housing now ranks as a top priority for her government.

The man in charge may still be the same (Sajid Javid) but both the creation of the Ministry for Housing, Communities and Local Government (MHCLG) and the order of the words in the title are significant.

By my reckoning this is the first time since 1970 that the word ‘housing’ has appeared in the title of the organisation and the secretary of state responsible for it.

In the 38 years since the Ministry of Housing and Local Government was abolished to create the Department of the Environment the name has been changed again and again to reflect different briefs and priorities.

Between Peter Walker back in 1970 and Sajid Javid in 2018 we’ve had 28 different housing ministers of middle and junior rank, a handful of them with the right to attend Cabinet but not vote in it.