Government resumes this week after a summer in limbo following the Brexit vote and change of prime minister. The unanswered questions for housing are stacking up.

The Cabinet met to discuss Brexit and parliament returns on Monday for two weeks before MPs take another break for the party conferences.

And the next few months should bring answers to some of the questions that have been hanging over housing ever since the referendum result and change of government.

What part will housing investment play in the fiscal ‘reset’ expected in the Autumn Statement? Will the new government offer any flexibility in the spending review settlement?

Will Sajid Javid and Gavin Barwell offer a change of approach at the DCLG? Will they be any less obsessed with home ownership? Or any less willing to devolve funding and decision making? Will they give full government backing to the private member’s Homelessness Reduction Bill?

But the more you look beyond the big picture and look at the detail the fuller the ministerial Pending and In trays become.

END_OF_DOCUMENT_TOKEN_TO_BE_REPLACED

Originally posted on August 24 on Inside Edge 2, my blog for Inside Housing

A million new homes by 2020? The latest housebuilding statistics for England suggest little progress towards the government’s target or aspiration or ambition. I forget which it is this week.

But is this graph shows there are few signs of a step change in output. After an uptick in 2013/14, starts have now been stuck on just over 140,000 for the last nine quarters. Completions have now caught up. 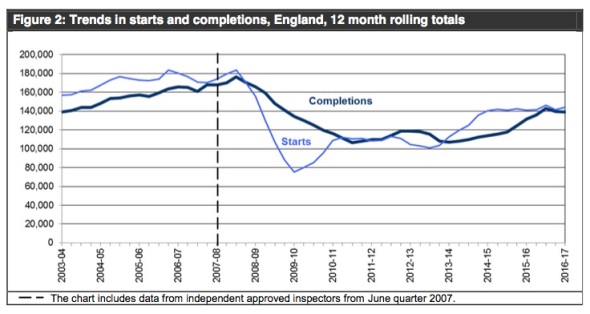 And this is before any real impact from the Brexit referendum. Projections by Capital Economics in a report by Shelter yesterday suggest that housebuilding will fall by 8% over the next year because of uncertainty following the vote and that output will be down 66,000 homes as a result.

So a year into that five-year non-target, it seems perfect timing for chancellor Philip Hammond to launch his much-touted fiscal stimulus in the Autumn.

END_OF_DOCUMENT_TOKEN_TO_BE_REPLACED

Originally posted on August 24 on Inside Edge 2, my blog for Inside Housing

Something about the rash of stories this week about ‘private landlord subsidy’ left me feeling very uneasy.

The stories were based on a briefing from the National Housing Federation (NHF) on how the amount of housing benefit that goes to private tenants has doubled in the last decade. As reported in the Daily Mail and elsewhere that means ‘Private landlords rake in £9bn a year from Housing Benefit’.

The figures were mostly familiar ones about the big increases seen since the financial crisis in the total bill, the number of claimants and the number of private tenants who are in work and also on housing benefit.

‘It is madness to spend £9bn of taxpayers’ money lining the pockets of private landlords rather than investing in affordable homes.’

He’s right, it is madness. Yes, private landlords do get £9.3bn in housing benefit. Yes, the bill has doubled since 2008.

END_OF_DOCUMENT_TOKEN_TO_BE_REPLACED

Originally published on August 18 on Inside Edge 2, my blog for Inside Housing

Today’s report by the all-party Communities and Local Government Committee recommending significant improvements to the homelessness safety net is getting a warm welcome – and no wonder.

The first select committee inquiry on homelessness since 2005 uncovers evidence of a system at breaking point as social housing provision declines, insecure private renting expands and welfare is ‘reformed’.

The report aims to help families falling through the gaps in the existing legislation as well as single people not covered by it, calls for a cross-government approach to homelessness and also makes specific recommendations to help vulnerable groups such as people with mental health problems, care leavers and ex-prisoners.

And in case you’re thinking this is just another select committee report whose recommendations will be ignored by the government, this one comes complete with legislation attached: a private members’ bill promoted by one of its members.

END_OF_DOCUMENT_TOKEN_TO_BE_REPLACED

Originally posted on August 15 on Inside Edge 2, my blog for Inside Housing

Cathy Come Home has lost none of its power as it nears its 50th anniversary. As everyone in housing knows, the classic BBC play brought homelessness to national attention. Shelter was founded a few days after its first transmission, Crisis a year later and many housing associations at around the same time.

There are currently three different ways to watch again: the original BBC play by Jeremy Sandford and Ken Loach is on iPlayer, a stage version by Cardboard Citizens will be on tour over the Autumn and Winter and its production is also available on YouTube). Housing associations with a connection have also formed the Homes for Cathy group to raise awareness.

Watching the original for the first time in years, it was obvious that Cathy is still just as hard hitting as an exposé of what happens when a family slip through the safety net. Her harrowing descent from flat to squat to traveller camp to hostel was watched by 12m people in 1966 (a quarter of the population) and they got the message that housing matters.

In that final scene at Liverpool Street station, Cathy’s kids join the other 4,000 that the commentary tells us are taken into care each year because their parents are homeless.

END_OF_DOCUMENT_TOKEN_TO_BE_REPLACED

Originally posted on August 4 on Inside Edge 2, my blog for Inside Housing

Record low interest rates have been great for people with mortgages but terrible for the housing system as a whole.

Like the Bank of England’s decision in March 2009 to cut the base rate to 0.5%, Thursday’s further reduction to 0.25% is motivated by concern about the economy as a whole. But nobody imagined in 2009 that seven and a half years later interest rates would still be as low, still less even lower.

The result has been severe distortion in the housing market. What was only meant to be a temporary fix has instead become a semi-permanent feature of the system that has benefitted home owners and landlords at the expense of everyone else. The effect of Thursday’s small cut will be limited in itself but it means that effects of the low rate regime will be with us for much longer.