‘A striking and complete disconnect’

Originally posted as a blog for Inside Housing on May 22.

Not much in today’s report from the UN Special Rapporteur on Extreme Poverty will surprise anyone who has worked in housing over the last decade.

The coruscating criticism of universal credit, the benefit cap, the benefits freeze, the under-occupation penalty and all the other welfare ‘reforms’ seen since 2010 arrives at a time when we have almost become immured to their impact on tenants in general and lone parents and disabled people in particular.

And it was only last week that the latest Homelessness Monitor from Crisis showed the effect of all that on the wider housing system, giving social landlords an incentive not to rent to the poorest people and driving them into a private rented sector in which housing benefit no longer covers their rent.

Yet the final report from Professor Philip Alston is still a shocking reminder of dire consequences that he says are ‘obvious to anyone who opens their eyes’ and of a government response that hovers between hostility, indifference and complacency.

Part of this is due to the Special Rapporteur’s vivid turn of phrase about what he calls ‘the systematic immiseration of millions’. Some choice examples include:

But what really struck me reading this final report was how completely he skewers the government’s response to criticism.

END_OF_DOCUMENT_TOKEN_TO_BE_REPLACED

Originally posted on November 19 on my blog for Inside Housing.

With unintended irony the government has responded to a United Nations report accusing it of being ‘in denial’ about extreme poverty by denying that there is a problem.

The last time a UN official visited Britain and had the temerity to criticise government policy it sparked a furious row on the Today programme.

Ministers dismissed Raquel Rolnik, the special rapporteur on the right to adequate housing, as ‘the woman from Brazil’ and ‘an absolute disgrace’ ad accused her of producing ‘a misleading Marxist diatribe’.

This time around there was no real row about ‘the man from Australia’, no formal complaint to the UN secretary-general and the Today programme ignored Professor Philip Alston, special rapporteur on extreme poverty and human rights.

Whether that reflects changed editorial priorities at the BBC, a ministerial determination not to rise to the bait or simply the way that Brexit sucks away all the oxygen from other news remains to be seen.

However, Professor Alston’s report published in London on Friday is if anything even more damning that the one produced by Ms Rolnik.

END_OF_DOCUMENT_TOKEN_TO_BE_REPLACED

The rise of working homelessness

Originally posted on my blog for Inside Housing on July 23.

Ever since 2010 the government has assumed that work is the solution to poverty and problems with housing.

It’s an assumption that underpins universal credit and it’s been nourished by a steady drip of propaganda from right-wing think tanks and newspapers about the alleged role of social housing in encouraging worklessness.

Anyone with experience of the benefits system knows that this is at best a simplistic and at worst a dangerously inaccurate interpretation of what is going on.

For all the government’s proclamations of a ‘jobs miracle’, work alone is not a guaranteed route out of poverty or poor housing or even, it now seems, homelessness.

END_OF_DOCUMENT_TOKEN_TO_BE_REPLACED

From housing ladder to housing treadmill

Originally posted on April 30 on my blog for Inside Housing.

Once upon a time the image of a ladder was a fair representation of the housing system. Not anymore.

The old days in which the home-owning majority saved for a deposit and got a mortgage, a significant majority put their names down for a council house and got one and the rest used the private rented sector as a temporary transition are long gone.

And a report out today from the Joseph Rowntree Foundation (JRF) suggests a new image has replaced the ladder for people on low incomes struggling with high housing costs and insecure jobs and tenancies: a housing treadmill, where people ‘were running to stay and were worried about falling off completely’.

END_OF_DOCUMENT_TOKEN_TO_BE_REPLACED

Originally posted as a column for Inside Housing on December 4.

One instinctive reaction to the news over the weekend that Alan Milburn and his fellow Social Mobility Commissioners have resigned is a simple question: what took you so long?

After all, what was then the Social Mobility and Child Poverty Commission was the creation of Nick Clegg, with the idea that they would hold the current and future future governments to account.

After the 2015 election, when Clegg and most of his Lib Dem colleagues lost their seats, the child poverty bit was taken out so that the commission could concentrate on the more Conservative-sounding and more convenient part of its brief.

That is just as well for them as child poverty is now rising again in the face of stagnant wages, rising rents and frozen benefits but it seemed there was still a job to be done in ensuring that government paid attention to wider social concerns.

And when Theresa May became prime minister in 2016 her themes of correcting ‘burning injustices’ and ‘a country that works for everyone’ it seemed that it might be worth the commissioners hanging around to help.

That came to an end on Saturday night when Milburn and three other commissioners, including former Tory Cabinet minister Gillian Shepherd, tendered their resignations (Downing Street claims he jumped before he was pushed).

END_OF_DOCUMENT_TOKEN_TO_BE_REPLACED

Look beyond the rate rise for the real housing squeeze

Originally posted as a column for Inside Housing on November 2.

Today’s first rise in interest rates for a decade is an important symbolic moment but it will make little or no immediate difference to the housing costs of millions of home owners with a mortgage.

The increase from 0.25% to 0.5% could see average mortgage payments rise by around £15 a month but it will not apply straight away to people with fixed rate mortgages and in any case it only restores the base rate to what was a record low between 2009 and the aftermath of the referendum.

Compare that with the continuing squeeze on benefits and tax credits/universal credit that the Institute for Fiscal Studies forecasts today will help to increase the percentage of children in relative poverty after housing costs from 30% now to 37% by 2022.

And contrast it with the latest overall benefit cap statistics also published today: as at August 68,000 families were hit by the lower cap that came into effect a year ago and nearly a third of them are losing between £50 and £100 a week. The cap is now £26,000 in London and £20,000 elsewhere.

END_OF_DOCUMENT_TOKEN_TO_BE_REPLACED

Crisis warns of surge in homelessness

Originally posted as a column for Inside Housing on August 10.

If the true scale of homelessness revealed in a report for Crisis is shocking enough now, try looking at the projections for the future.

The report by Professor Glen Bramley of Heriot Watt University estimates that what it calls ‘core homelessness’ affected 160,000 households in 2016, an increase of a third since 2011.

That means that at any one time:

As the graph shows, the increases are expected to be especially sharp in unsuitable temporary accommodation, which includes bed and breakfast accommodation and out of area placements. 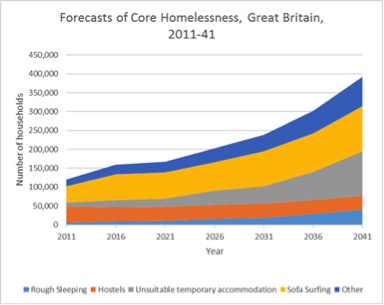 END_OF_DOCUMENT_TOKEN_TO_BE_REPLACED

Jules Birch
Create a free website or blog at WordPress.com.