That’s the increase in the housing wealth of British households since 2000, according to new analysis from the Resolution Foundation. Perhaps even more remarkably, as the graph below shows, around half of that has been (un)earned since 2012, in the wake of a Global Financial Crisis that seemed set to bring the whole market crashing down.

Where the least wealthy third of households gained less than £1,000 per adult, the wealthiest 10 per cent chalked up an average gain of £174,000.

Needless to say, the gains for anyone who has remained a social tenant or a private renter are zero and zero – and less than zero for leaseholders unlucky enough to be stuck in unmortgageable and unsaleable flats.

END_OF_DOCUMENT_TOKEN_TO_BE_REPLACED

Boris Johnson has broken all kinds of election promises in his announcement on health and social care levy but for housing purposes there is one pledge remains front and centre.

Amid the wreckage of the triple locks on pensions and tax rates, it’s a survivor of the sunlit days of July 2019 when the new prime minister stood outside Number 10 and said: ‘My job is to protect you or your parents of grandparents from the fear of having to sell your home to pay for the costs of care. And so I am announcing now on the steps of Downing Street that we will fix the crisis in social care once and for all with a clear plan we have prepared to give every older person the dignity and security they deserve.’ Note the order of priorities.

It was there too in the Conservative manifesto in December, even though the ‘clear plan’ had become a somewhat vaguer aspiration for a cross-party consensus.  The significant bit came next (with original emphasis): ‘That consensus will consider a range of options but one condition we do make is that nobody needing care should be forced to sell their home to pay for it.’

And it’s there front and centre in the plan announced this week for a new £86,000 cap on the amount that anyone in England will have to spend on their personal care costs.

There are still some big caveats to mention – not least that the cap does not include accommodation costs and that social care comes after the NHS in the queue for cash – but the net effect should still be that people get to keep far more of their housing wealth and pass it on to their children and grandchildren.

Yet when we consider the details of the Health and Social Care Levy that will pay for it all, it’s striking that one category of assets and income is left completely untouched.

END_OF_DOCUMENT_TOKEN_TO_BE_REPLACED

Why are house prices rising around the world?

Originally written as a column for insidehousing.co.uk

News that house prices are rising at their fastest rate since 2004 highlights both the perverse effects of the pandemic and long-term problems with affordability.

Average prices across the UK rose by 13.2 per cent in the year to June according to the official UK House Price Index  with Wales and the North of England leading the way.

While a low level of transactions suggests a need for some caution in interpretation, the same pattern has emerged in other house price surveys of double digit inflation led by regions outside London and the South East.

That confounds expectations at the start of the pandemic of recession about a declining market. The stamp duty holiday announced last Summer looks like an expensive mistake that has just helped fuel house price inflation.

In normal circumstances a bust might well follow the boom but continued support for the market will come from the estimated £180 billion in savings  that households have built up during the pandemic and the wealth gap  between housing haves and have-nots seems set to widen still further.

There is evidence of the same pattern emerging in housing markets around the world: annual house price growth across the 38 richest nations has more than doubled during the pandemic to hit 9.4 per cent, according to the OECD.

END_OF_DOCUMENT_TOKEN_TO_BE_REPLACED

The pandemic and wealth inequality

Three numbers from a report published this week sum up the financial impact of the pandemic on households – and housing is at the heart of it.

First, £50,000. That’s the average increase in the wealth per adult of the richest 10 per cent of households, says the report by the Resolution Foundation think tank.

Second, £7,800. The increase in the wealth per adult of households in the fifth decile, those right in the middle of the wealth distribution.

Third, £86. That’s the average gain per adult in the poorest 30 per cent of the population.

In part, these numbers reflect the pattern established in the 1980s and then accelerated after the financial crisis whereby wealth begets wealth.

But they also represent something new: the Resolution Foundation estimates that total household wealth has increased by £900 billion since the start of the pandemic, making the period we have just lived through the first recession since the end of the Second World War in which we have got richer.

Some of that is down to spending less (£125 billion) and getting into less consumer debt (£10 billion) but over 80 per cent of it is due to rising asset prices (£750 billion).

Some of that is driven by rising share values but most of it is due to increases in house prices, which are now up by more than 10 per cent since the start of the pandemic, fuelled in part by the stamp duty holiday.

END_OF_DOCUMENT_TOKEN_TO_BE_REPLACED

Originally published on my blog for Inside Housing on February 16.

Analysis published on Friday by the Institute for Fiscal Studies confirms the familiar story of the collapse of home ownership among younger people that has been accompanied by a surge in private renting and adults still living with their parents into their late 20s and early 30s.

The IFS briefing concentrates on people aged 25-34, exactly the age group who could once have been expecting to take their first step on to the housing ladder.

The collapse has obviously been biggest in London but home ownership rates have fallen even in the cheapest regions like the North East and Cumbria. 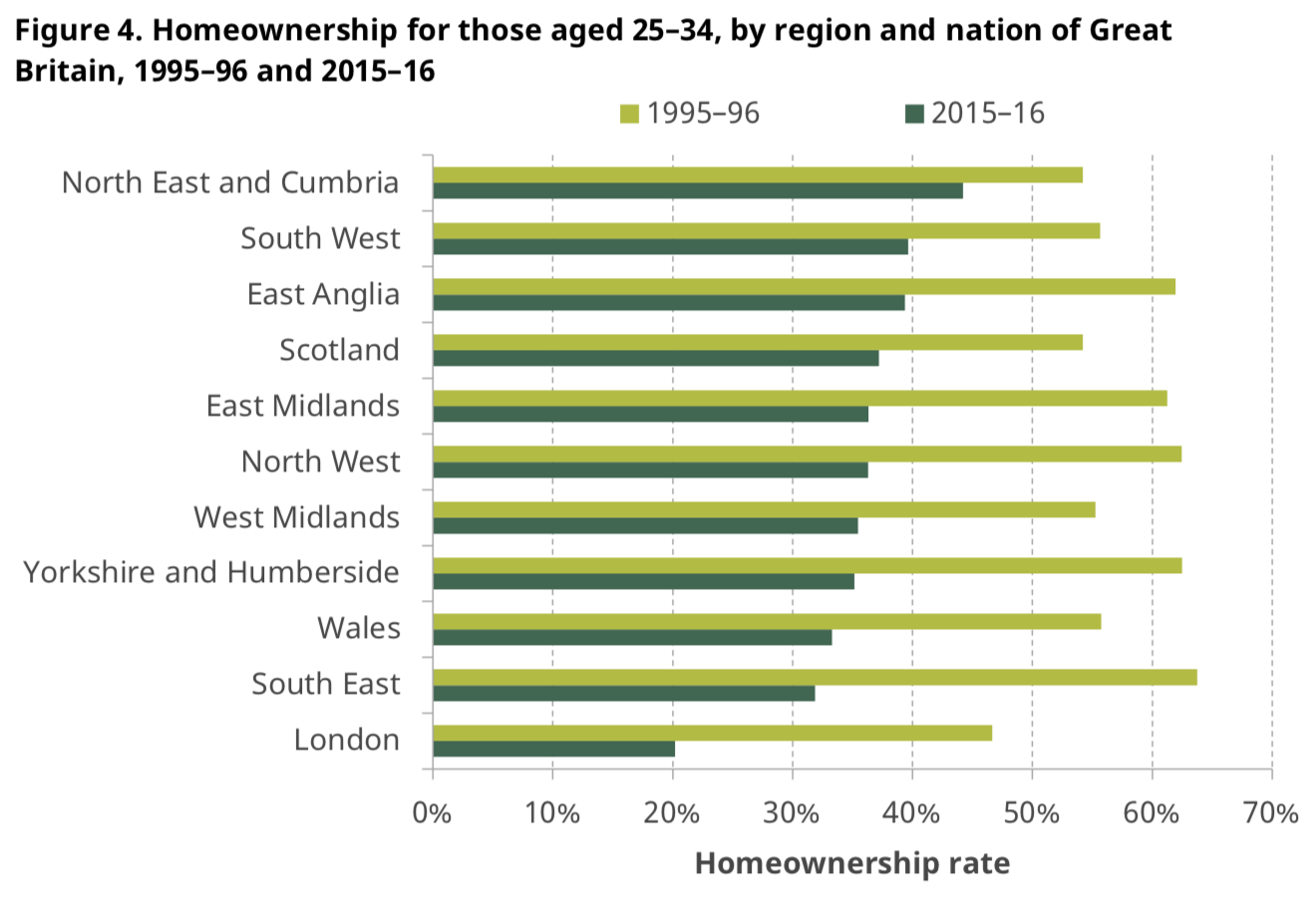 END_OF_DOCUMENT_TOKEN_TO_BE_REPLACED

Is housing more politically important than the NHS?

Originally posted for Inside Housing on February 13.

When you’re used to seeing things up close sometimes it makes sense to take a step back and look at the bigger picture.

Just such a macro look at housing comes in the latest episode of one of my favourite podcasts.

This week’s episode of Talking Politics is about what it calls ‘the fundamentals’, the factors that influence the politics of voters’ everyday that seem to outside the control of the politicians

The discussion starts with two propositions that are startling not just in themselves but also because they come from Cambridge academics who are more used to talking about Brexit and Trump than housing affordability and housebuilding.

The first is that housing is more politically important to the government than the NHS. Following on from that, the second is that if Jeremy Corbyn wins the next election housing will be the main reason why.

END_OF_DOCUMENT_TOKEN_TO_BE_REPLACED

Originally posted as a column for Inside Housing on December 4.

One instinctive reaction to the news over the weekend that Alan Milburn and his fellow Social Mobility Commissioners have resigned is a simple question: what took you so long?

After all, what was then the Social Mobility and Child Poverty Commission was the creation of Nick Clegg, with the idea that they would hold the current and future future governments to account.

After the 2015 election, when Clegg and most of his Lib Dem colleagues lost their seats, the child poverty bit was taken out so that the commission could concentrate on the more Conservative-sounding and more convenient part of its brief.

That is just as well for them as child poverty is now rising again in the face of stagnant wages, rising rents and frozen benefits but it seemed there was still a job to be done in ensuring that government paid attention to wider social concerns.

And when Theresa May became prime minister in 2016 her themes of correcting ‘burning injustices’ and ‘a country that works for everyone’ it seemed that it might be worth the commissioners hanging around to help.

That came to an end on Saturday night when Milburn and three other commissioners, including former Tory Cabinet minister Gillian Shepherd, tendered their resignations (Downing Street claims he jumped before he was pushed).

END_OF_DOCUMENT_TOKEN_TO_BE_REPLACED

Originally posted as a column for Inside Housing on November 29.

What happens to the huge wealth generated by soaring house prices is a crucial issue not just for housing but also for the future of Britain.

The Office for National Statistics puts the value of unmortgaged housing equity at just under £4 trillion and second only to pension wealth of £4.5 trillion in total personal wealth of £11.1 trillion.

Savills estimates unmortgaged equity at over £5 trillion and says housing is now the single biggest source of wealth in the country and a report today by the Halifax says the total value of the UK housing stock has passed £6 trillion for the first time.

Whatever the number you put in front of those 12 zeros that is a serious amount of money- the UK’s national debt is currently worth £1.8 trillion.

As by far the most visible divide between baby boomers like me lucky enough to have been born and buy houses at the right time and millennials born at the wrong time and stuck in the wrong housing tenure, housing dominated an event on wealth inequality that I went to in Bristol recently.