Benefit cap surge is a warning of worse to come

Originally published as a column for Inside Housing on August 7.

Step away from planning reform for a few moments and grim news out today (Thursday August 6) reveals a more immediate crisis in the benefits system with even more alarming implications for the future.

Figures published by the Department for Work and Pensions (DWP) show that the number of households subject to the benefit cap almost doubled to 154,000 between February 2020 and May 2020. Of those, 140,000 had children.

More households have moved on to Universal Credit over time so the grey line for total capped households is the one to watch – note that the increase is much bigger than when the benefit cap was reduced in 2016. 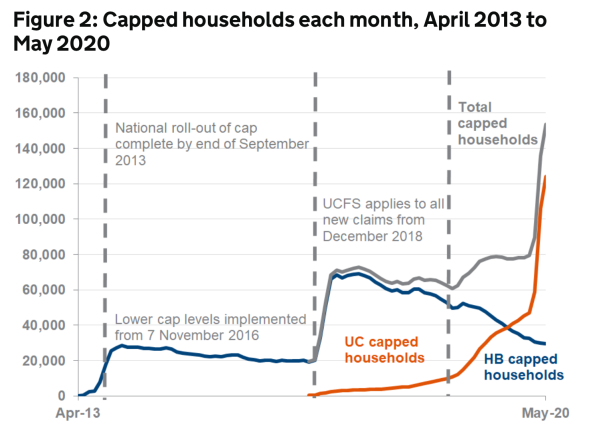 END_OF_DOCUMENT_TOKEN_TO_BE_REPLACED

Originally posted on December 4 on my blog for Inside Housing.

Go back to the days when the government’s confidence in its marketising agenda for social housing was at its greatest and one consistent justification was made by ministers for their policies.

The introduction of affordable rent would mean more new homes for the same money, fixed-term tenancies in the Localism Act would ‘end the lazy consensus’ and free up more lettings for people on the waiting list and Welfare Reform Act measures to remove the spare room subsidy would free up larger properties for overcrowded families.

Figures released last week show the combined impact of the policies and the results are not pretty. END_OF_DOCUMENT_TOKEN_TO_BE_REPLACED

A look ahead to the Budget part three: welfare and tax

Originally published as a column for Inside Housing on May 20.

Some very big questions on housing, welfare and tax are looming ahead of this Budget.

If there is not the same sense of raised expectations that surrounds the prospects for land and investment, the answers given by Philip Hammond on November 22 will still go a long way to determining what type of housing system we will have going into the 2020s.

I’ve written many times before about the way that the aftermath of the financial crisis in 2008 and the policies adopted under George Osborne since 2010 have combined to create a system in which older and better-off home owners have gained at the expense of younger and poorer renters.

And that these figures do not include substantial increases in housing wealth over the same period as house prices have risen.

Many factors have driven this including falling rates of home ownership and rock bottom mortgage rates but policies on tax and welfare set by central government have also played a part.

So what could Hammond do to redress the balance?

END_OF_DOCUMENT_TOKEN_TO_BE_REPLACED

Look beyond the rate rise for the real housing squeeze

Originally posted as a column for Inside Housing on November 2.

Today’s first rise in interest rates for a decade is an important symbolic moment but it will make little or no immediate difference to the housing costs of millions of home owners with a mortgage.

The increase from 0.25% to 0.5% could see average mortgage payments rise by around £15 a month but it will not apply straight away to people with fixed rate mortgages and in any case it only restores the base rate to what was a record low between 2009 and the aftermath of the referendum.

Compare that with the continuing squeeze on benefits and tax credits/universal credit that the Institute for Fiscal Studies forecasts today will help to increase the percentage of children in relative poverty after housing costs from 30% now to 37% by 2022.

And contrast it with the latest overall benefit cap statistics also published today: as at August 68,000 families were hit by the lower cap that came into effect a year ago and nearly a third of them are losing between £50 and £100 a week. The cap is now £26,000 in London and £20,000 elsewhere.

END_OF_DOCUMENT_TOKEN_TO_BE_REPLACED

Originally posted on April 6 on my blog for Inside Housing.

What did see when you watched last night’s Panorama on the benefit cap?

Most people reading this here will, I think, have seen the impact of an arbitrary policy that leaves thousands of people with 50p a week towards their rent.

But outside my timeline on Twitter the view was very different. Roughly 95 per cent of tweets with the hashtag #benefitcap were hostile, but to the people featured in the programme rather than the policy.

There is nothing new in this divide of course – exactly the same thing happened with Benefits Street and How to Get a Council House and a Dispatches documentary on the cap last month– but this was an hour on BBC One on primetime.

Part of the problem lay with the way that Panorama framed the issue. This was clear in the first two minutes.

END_OF_DOCUMENT_TOKEN_TO_BE_REPLACED

Originally published on November 1 on my blog for Inside Housing

You might think a policy that threatens more than 300,000 children with destitution and homelessness would be attracting more attention.

The reduction in the overall benefit cap starts in just six days’ time (Monday November 7) and will be introduced in different areas over the next few weeks. It is the first of a series of crucial events for housing this month that I blogged about yesterday. But only now is it getting much attention in the national media. That’s partly thanks to new analysis by the Chartered Institute of Housing (CIH), which suggests that 116,000 families will be affected and a total of 319,000 children.

The cap is being reduced from £26,000 a year to £23,000 in London and £20,000 elsewhere (lower limits apply to single people with no children). The cap essentially works via housing benefit. The more children people have, the higher their non-housing benefits will be and the more their housing benefit will be cut. At the levels of the lower cap, widespread rent shortfalls are inevitable unless people qualify for one of the exemptions or a discretionary housing payment (DHP) from their local authority.

END_OF_DOCUMENT_TOKEN_TO_BE_REPLACED

The ides of November

Originally posted on October 31 on my blog for Inside Housing

The last four months have seemed to offer a series of new possibilities for housing from Theresa May’s new government. From the prime minister’s rhetoric about ‘a country that works for everyone’ to housing minister Gavin Barwell’s emphasis on the importance of all tenures, the signals have been pointing to a significant shift away from the stance of the previous Tory administration. Friday brought good news when the Homelessness Reduction Bill won a second reading with the support of the government.

But events in the next month or so will go a long way to determining where those signals are really leading us. For all the rhetoric we don’t know much more detail than when the government went back to work at the beginning of September. While the dates of some events are already set, others are expected “shortly”. Here’s a selected list:

An updated impact assessment published in August estimates that 88,000 households (107,000 adults and 244,000 children) will be affected by the lower cap, including 64,000 who would not have been covered by the original cap.

That is much less than in the original impact assessment, one reason being that the government has introduced new exemptions for guardians and carers in response to defeat in the courts. It also seems on the low side given that it means housing benefit will not cover the rent for families in more expensive areas and with higher rents and for larger families everywhere, even in social housing. And it will only encourage more landlords to restrict their lettings of ‘affordable’ homes to ‘working families’.

To borrow a line from Steve Hilditch, if October ended with the Homelessness Reduction Bill’s second reading, then November will kick off what can only be a homelessness expansion policy.

END_OF_DOCUMENT_TOKEN_TO_BE_REPLACED

Government resumes this week after a summer in limbo following the Brexit vote and change of prime minister. The unanswered questions for housing are stacking up.

The Cabinet met to discuss Brexit and parliament returns on Monday for two weeks before MPs take another break for the party conferences.

And the next few months should bring answers to some of the questions that have been hanging over housing ever since the referendum result and change of government.

What part will housing investment play in the fiscal ‘reset’ expected in the Autumn Statement? Will the new government offer any flexibility in the spending review settlement?

Will Sajid Javid and Gavin Barwell offer a change of approach at the DCLG? Will they be any less obsessed with home ownership? Or any less willing to devolve funding and decision making? Will they give full government backing to the private member’s Homelessness Reduction Bill?

But the more you look beyond the big picture and look at the detail the fuller the ministerial Pending and In trays become.

END_OF_DOCUMENT_TOKEN_TO_BE_REPLACED

The turn of the screw

Originally posted on April 4 on Inside Edge 2, my blog for Inside Housing

You’d never guess it from the sound of the violins playing for Buy to Let but there were other significant changes to benefits and tax on housing this month.

As ‘investors’ rushed to beat the April 1 deadline for higher rates of stamp duty on second homes, the orchestra reached a crescendo after new affordability tests were proposed by the Bank of England.

All that noise meant much less was heard about their tenants facing up to the first year of an unprecedented four-year freeze in their local housing allowance and other benefits and tax credits.

After three years in which LHA increases were restricted to 1 per cent, housing benefit rates for private tenants will now stay the same until 2020. Whatever the problems faced by their landlords, that means tenants will inevitably see rising shortfalls between their benefit and their rent. Equally inevitably, you would think, evictions will rise.

END_OF_DOCUMENT_TOKEN_TO_BE_REPLACED

Originally posted on July 22 on Inside Edge 2, my blog for Inside Housing

Looking to gauge the effects of the latest benefit cuts on housing? The official impact assessments are at best a starting point.

Documents published for the second reading of the Welfare Reform and Work Bill on Monday evening (available here) do give the Department for Work and Pensions’ (DWP) view on what to expect, but there are several reasons why it is a severely blinkered one.

First, they only cover what is actually in the Bill and many of the main housing benefit changes in the Budget do not require primary legislation.

So there is an impact assessment of the five-year freeze on most working age benefits but it does not include the freeze of the local housing allowance. Similarly, we do not get the DWP view on ending automatic entitlement to housing benefit for 18 to 21-year-olds because that will be done by regulation rather than primary legislation.