The charge of the Brexit brigade

For some strange reason, these lines are running through my head ahead of the triggering of Article 50.

“Forward, the Light Brigade!”
Was there a man dismayed?
Not though the soldier knew
Someone had blundered.
Theirs not to make reply,
Theirs not to reason why,
Theirs but to do and die.
Into the valley of Death
Rode the six hundred. 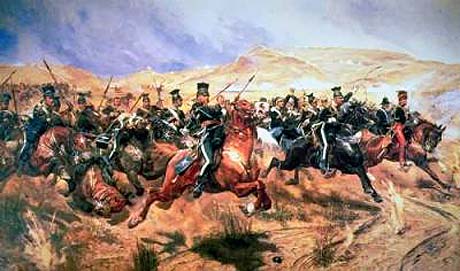 It’s not so much because I think we will be metaphorically blown to pieces by the guns of the other 27 EU members. Nor because that verse is a pretty accurate description of MPs trooping through the lobbies to vote for something they know is a historic mistake. It’s because our generals seem to think those are reasons to send us even faster into the valley.

Without stretching the metaphor too far, the famous charge into the Russian guns at the Battle of Balaklava was the result of ambiguous orders, arrogance and personal rivalries. Lord Raglan probably said something about ‘having a punt, having a go, that’s what pumps me up’, Lord Lucan (yes, really) gave a speech in front of a bus and the Earl of Cardigan obeyed an order he knew was suicidal while mumbling something about a country that works for everyone.