← Support and protect
Cats and cream →

Originally published on September 13 on Inside Edge 2, my blog for Inside Housing

As Theresa May’s government busies itself trashing the legacy of David Whatsisname and George Wotsit, what about housing?

The new government’s pick-and-mix approach to the pre-referendum commitments now includes the budget surplus target, a sudden switch to grammar schools, a delay on Hinkley Point and a downgrading of the Northern Powerhouse.

So comments by Gavin Barwell in his first major speech as housing minister yesterday make for interesting reading. Speaking at RESI in Newport (curiously a conference held in Wales that is all about England) he said:

‘The way you make housing in this country more affordable to rent and buy is you build more homes. There is still a role for the government doing specific things to help people on to the first rung but this can’t be at the exclusion of all else.’

I wasn’t there, and the DCLG has not yet released a transcript of his speech, so it’s possible I may have missed some nuances in what he said. However, Inside Housing, the FT, the Telegraph and Property Week all have the same interpretation.

The apparent shift away from an obsession with ownership – Barwell added that ‘we need to build more homes of every single type and not focus on one single tenure’ – is interesting in its own right but he also talked specifically about starter homes.

These have been dubbed ‘the cuckoo in the nest’ of affordable housing, potentially gobbling up not just £2.3 bn of government grant but most section 106 contributions as well. Barwell acknowledged this argument:

‘There’s a little bit of a tension between the overall supply objective and measures specifically to help people onto the housing ladder.’

And asked whether the 200,000 target only means homes sold at a 20% discount, he said that other tenures such as affordable rent may count towards it:

‘It’s obviously a manifesto commitment that we have, what I’ve got to look at is can we have a wider range of products in terms of affordable housing, and not just say that the only thing that qualifies is this one.’

So far, so interesting, except that the DCLG issued a statement later that there was no change in the government’s commitment to build 200,000 starter homes.

So what’s going on? Was Barwell being slapped down like a Brexiteer minister who has annoyed Downing Street – but this time by his own department?

Was he simply presenting the government’s priorities in a way that he thought an audience interested in the private rented sector might like to hear? Only a few days before this speech he was telling The Sun that ‘we believe people who aspire to own their own home should have the opportunity to realise their ambition’ as he hailed shared ownership as a chance to get on the property ladder with a deposit of less than £1,000.

Or is there more wriggle room than there might appear? The manifesto commitment – 200,000 starter homes at a 20% discount – seems pretty clear. Even other ownership schemes that could be branded as ‘starter homes’ (such as rent to buy) do not meet that specific definition. However, as I’ve blogged before there was an ambiguity in the manifesto too: 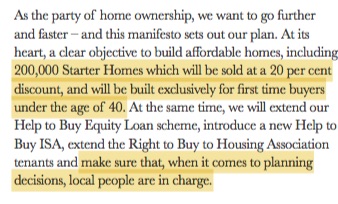 If ‘local people are in charge’ when it comes to planning how can the government force them to prioritise starter homes over other forms of affordable housing they might prefer?

Theresa May has already shown a flexible attitude to a manifesto that was in any case partly a negotiating position to be adopted in coalition negotiations after the election.

Following Whatisname’s unexpected victory, the government had to deliver on housing policies that had essentially been written on the back of a fag packet via the Housing and Planning Act. Despite resistance in the Lords, with peers making all the same points as Barwell, it is now law that ‘starter homes’ will be ‘sold at a discount of at least 20% of the market value’, that planning authorities will have a ‘general duty to promote’ them and that the definition of ‘affordable housing’ for planning purposes now includes them.

However, look a little closer at the Act and the specifics are not there. There will be a ‘starter homes requirement’ to be met by local authorities before they grant planning permission for any residential development (except for rural exception sites). The planning obligation may be to ‘provide a certain number of starter homes or to pay a sum to be used by the authority for providing starter homes’.

All of the detail (including on potential ‘discretions’ for planning authorities) was left to regulations. These were expected to be published before the summer recess but have still not been published. Details in a consultation in 2014, the government’s response in 2015 prompted fears that affordable housing could be displaced on a huge scale.

A technical consultation on the regulations in 2016 proposed that developers should have to provide 20% starter homes on all sites of over 10 units. On the assumptions made in the consultation, that would mean 90% of homes provided through the planning system would be starter homes.

However, there are still no regulations. The delay in publishing them could be down to the change of government but could it also reflect problems behind the scenes in getting the policy to work?

We are already 18 months in to the government’s five-year term and we still don’t know how it intends to deliver the 200,000 starter homes. On current levels of output that means that around four out of every 10 homes built in the next three years will be sold at a 20% discount. If that doesn’t sound remotely credible, the government has also pledged 135,000 shared ownership homes. Together they would represent 78% of current output from 2017 to 2020: ‘a very improbable outcome’ as the CML put it, even before the delay in the regulations.

Sooner or later those airy manifesto commitments were always going to have to confront reality (as with starter homes, so with the right to buy and forced sales) and modifications were going to have to be made.

The change of prime minister and government make that easier and also present an opportunity to change course. However, there are rival agendas clamouring for attention: the social housing sector wants more flexibility on the Act and the affordable housing programme; the private rented sector wants tax increases to be reversed; housebuilders want to continue getting Help to Buy and cuts in ‘red tape’.

After Whatsisname and Wotsit what next? The next couple of months should provide some answers via the regulations, speeches at the Conservative conference, and the Autumn Statement.