The state of private renting

Originally published as a column for Inside Housing on August 2.

As home ownership and social renting continue to decline, the astonishing rise and rise of the private rented sector continues.

But who is the sector housing and what are the consequences for tenants? Here are a dozen key points that I picked out from the English Housing Survey for 2015/16.

Growth continues to be fastest among young people as high house prices stop them buying and social housing is in short supply.

That figure is for households, so it could well mask an even stronger growth in the number of individual young people renting as more of them share.

The average private renter household reference person (HRP – the oldest or highest-earning person in the households) is 40, making them much younger than social renters (52) and owner-occupiers (57).

However, since the financial crisis private renting has grown among all age groups, with sharp increases also seen among the 35-44s, 45-54s and 55-64s.

Following on from that point about age, the proportion of families with dependent children renting privately has risen from 30% to 36% over the last ten years.

Given the overall growth in the sector, that is getting on for an extra million more families with children.

The proportion of lone parents with dependent children rose from 9% to 11% and there are now 519,000 of these households compared to 229,000 ten years ago.

That was matched by a fall in the number of lone parents with children in social renting from 686,000 to 564,000 in the last ten years.

A quarter of private renters had a non-UK or Irish household reference person, making the sector much more diverse than social renting (8%) and owner-occupation (3%).

Taking into account the incomes of everyone in the household, the mean of £673 a week for private renters puts them midway between social renters (£394) and people buying with a mortgage (£1,071).

Put those factor together and private renters spend the highest proportion of their incomes (35%) on rent.

Unsurprisingly, affordability is worst for private renters in London, where average rents take up 45% of incomes. 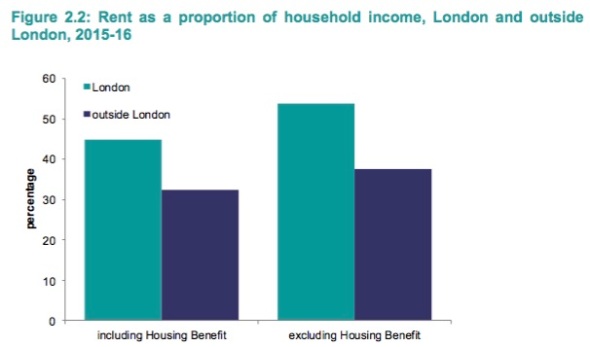 Some 24% of private renters received housing benefit in 2015/16, the equivalent of 1.1 million households. However, less than a quarter of those had their full rent covered.

That is a graphic illustration of the way that the Local Housing Allowance has increasingly left private renters with shortfalls against their rent. The freeze in LHA rates and shared accommodation rate for the under-35s mean the gap is rising year on year.

Landlords are increasingly reacting by refusing to rent to the under-35s, according to research for the Residential Landlords Association this week.

Given that the under-35s are the fastest growing private renter demographic that can only spell trouble ahead.

Private renters had lived in their accommodation for an average of 4.3 years compared to 11.6 years got social renters and 17.8 for owner-occupiers.

This may reflect a diminishing number of older tenants who have been in their home for years on pre-1988 regulated tenancies.

This graph shows length in the home by age group:

It unsurprisingly follows that private renters move much more frequently than people in other tenures.

But the insecurity of shorthold tenancies plus the rising number of school-age children is a worrying combination.

Of 2.1 million total house moves in England in 2015/16, 787,000 were by households moving within the private rented sector while 196,000 new private renter households were created.

Most private renters (73%) said their tenancy ended because they wanted it to.

Among those who had moved in the last three years because their landlord asked them to, almost two-thirds (63%) said this was because the landlord wanted to use or sell the property.

These are two of the exceptions in legislation in Scotland ending no-fault evictions and it suggests there would be limits on the impact of similar reforms in England.

Some 28% of private rented homes failed to meet the Decent Homes Standard. That is double the proportion in social housing (13%) but it has improved markedly over the last 10 years.

However, 17% of private rented homes have at least one Category 1 safety hazard, compared to 13% of owner-occupied and 6% of social rented homes. The main risks were excess cold and falls. 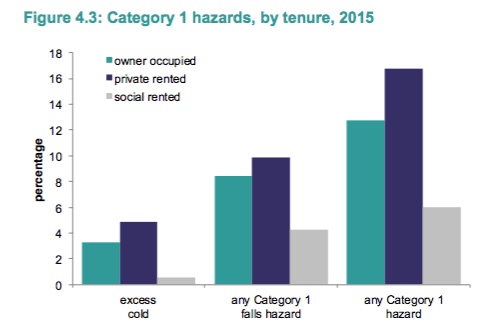 Are private renters satisfied? It depends on how you ask the question.

Ask about their current accommodation, and dissatisfaction among private renters is lower (10%) than among social renters (13%).

Ask about their tenure status though and private renters are the least satisfied. Some 21% were dissatisfied with their status as private tenants, including 9% who were very dissatisfied.

That compares to 10% of social renters and less than 1% of owner-occupiers.

Some 59% of private renters (2.6 million households) expected to buy at some point. Of those who didn’t expect to buy, 69% said this was because they did not expect to afford it.

Some 7% of private renter households (315,000) included at least one person on a social housing waiting list, with that proportion rising to 12% among households with a dependent child.