Originally posted on December 15 on Inside Edge 2, my blog for Inside Housing

Tuesday morning’s announcement by Brandon Lewis on deregulation of housing associations delivers on the government’s side of The Deal and its pledge to get them reclassified as soon as possible,

However, it also completes the division of what we used to call the housing ‘sector’ into two very different camps: councils forced to do what the government says; and associations giving a new meaning to the ‘voluntary’ sector.

The housing minister told the Communities and Local Government Committee that amendments will be laid to the Housing and Planning Bill aimed at enabling the ONS to re-reclassify housing associations as private sector while maintaining proportionate protection for lenders and tenants.

The biggest move was to make Pay to Stay voluntary for housing associations, which is quite a climbdown. However, the amendments will also include removal of the consents and disposals regimes so that associations no longer have to seek permission of the regulator and the abolition of the disposals proceeds fund so that they no longer have to spend receipts from the right to buy according to criteria set by the regulator. More detail is here.

END_OF_DOCUMENT_TOKEN_TO_BE_REPLACED

Originally posted on November 13 on Inside Edge 2, my blog for Inside Housing

Three rival visions for housing in England from three rival politicians who all think they know best.

Let’s assume some of this is the result of private disputes about budgets (especially between Osborne and IDS) playing out in public. The run-up to any spending review features media briefings designed to promote pet projects or scupper those of others. But this is still different: it’s not pet projects at stake here but potentially the entire future of housing. And the rival visions directly contradict each other.

END_OF_DOCUMENT_TOKEN_TO_BE_REPLACED

Originally posted on November 3 on Inside Edge 2, my blog for Inside Housing

As MPs debated the Housing and Planning Bill on Monday it was hard to escape the impression that the real action was elsewhere.

From the extension of the right to buy to the forced sale of council houses to starter homes, key discussions had either already happened or were still taking place outside the Commons chamber. Yes, talks behind the scenes are an inevitable part of any Bill, but far more so with this one than any other that I can remember. Yes, the Deal removes what would have been a key element in the legislation from parliamentary scrutiny but this is about more than just that.

That’s partly because this is a back of a fag packet Bill that sets out some general principles with the detail to be filled in later. We still  know little more about how the sums will add up for paying housing association discounts from forced council sales than during the election campaign. And, as Alex Marsh points out in relation to Pay to Stay, there are whole chunks of the Bill that give the secretary of state the power to do pretty much whatever they like.

END_OF_DOCUMENT_TOKEN_TO_BE_REPLACED

Originally posted on October 30 on Inside Edge 2, my blog for Inside Housing

Few blockbuster franchises stop at just two films and the reclassification of housing associations in England as public sector will be no different.

The implications from Friday’s decision by the Office for National Statistics (dubbed Judgment Day II: the Reckoning by Pete Apps in his blog yesterday) are multiplying by the hour and are far too numerous for one blog. But here are some quick thoughts on the decision itself – and on possible sequels to come.

So what does it mean? First, and most seriously for George Osborne, it will add £60 billion of previously private sector housing association debt to the public sector balance sheet. The ONS decision says that this is likely to happen just in time for Budget 2016. Whoops! No wonder the chancellor sounded so relaxed/resigned about the prospect when questioned in a House of Lords committee last month (see my blog here).

END_OF_DOCUMENT_TOKEN_TO_BE_REPLACED

A technical change to an official index undermines everything that ministers have been telling us about private rents.

The Office for National Statistics (ONS) published its latest Index of Private Housing Rental Prices on Friday using improved methodology that puts the annual rent inflation rate at 2.1 per cent since January 2011.

That may not sound like much compared to soaring house prices but that is 75 per cent higher than the 1.2 per cent annual increase for the last four years derived from the old methodology. That had always seemed on the low side given the increases that tenants said they were paying, especially in London.

Here’s an ONS graph showing the difference it makes since January 2012: 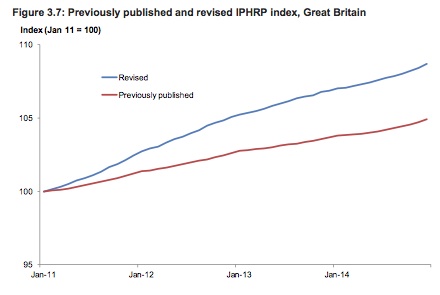