Next time you read about ‘fat cats’ earning more than the prime minister here’s something to bear in mind: so does his house.

The summarised tax returns released by David Cameron this weekend show that he had a total taxable income of just over £200,000 in 2014/15. The first £141,000 of that were his earnings as prime minister: he has not taken a pay rise since 2010 and has also voluntarily waived a £20,000 prime ministerial expenses deduction since 2011.

Most of the Panama Papers coverage has concentrated on Cameron’s links to his father’s offshore fund and an inheritance gift from his mother. However, he is also the first prime minister to rent out his existing home while living tax-free in Downing Street. The accounts show that he had a net rental income of £47,000 from letting out his house in Notting Hill, an amount that notes to the accounts confirm is his 50 per cent share of the proceeds: 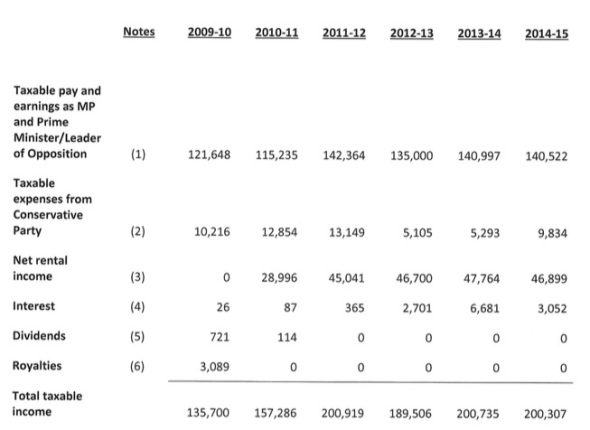 So the total rent (after expenses) received by the Camerons last year was £94,000 and in the first five years since he became prime minister they gained a total of £432,000 in rent.

However, that is not the total amount they will have ‘earned’ from their house as London house prices have also soared over the same period. The exact value of the Cameron house is hard to pin down, since they are reported to have spent £600,000 on renovations after buying it in 2006. Some reports put the value at £2 million in 2010, others £2.7 million.