Another week, another party conference that seems longer on talk than action on the housing crisis. Like the Liberal Democrats in Brighton, the Labour party in Manchester made all the right noises. It even advocated many of the same policies – if you can call carefully crafted aspirations policies.

As I noted in my blog for Inside Housing on Monday, the headline commitment by Ed Balls to funding 100,000 affordable homes and a stamp duty holiday from the proceeds of the 4G mobile phone auction is not actually a policy commitment at all, just a call for the government to do something in the next two years. If Labour wins the 2015 election, George Osborne will have already spent the money (almost certainly on something else) and in the absence of another one-off windfall housing will have to take its place in the queue for the zero-based spending review planned by Balls. His speech this week is a promising signal that housing could be a priority but no more than that.

However, the details of this theoretical plan beg some questions about whether Balls and Labour really get the scale of the housing crisis they will be facing. For starters, spending £500 million on another stamp duty holiday for first-time buyers may put Labour on the side of aspiration politically but there is no real evidence that the previous one worked. Over at Red Brick, Steve Hilditch notes that the 100,000 homes are meant to comprise 50,000 shared ownership 35,000 sub-market rent and 15,000 social rent homes. He sees that, plus an existing commitment to 25,000 social rent homes funded by a tax on bankers’ bonuses, as a welcome signal that social rent is not dead, but warns of the dangers of a political numbers game:

‘So far [shadow housing minister] Jack Dromey has avoided the trap of being seen to endorse “Affordable Rent” but we are undoubtedly in a period where the numbers game is being played, driven by the broader economic need to promote growth. So there is a focus on who can build the most homes, irrespective of what they are.  The housing question is more complex than that. Despite the huge housing shortage, it is not always the case that getting the maximum number of new homes built is the right answer. Just as thousands of apartments with river views being sold to foreign millionaires does little to help the overall balance of supply and demand, so building homes at “affordable rents” without security of tenure will prove to be of little help to most people on housing waiting lists.’

Later in the conference there was another nod in the direction of social rent when shadow communities secretary Hilary Benn introduced Islington’s cabinet member for housing James Murray as an example of what Labour councils are achieving. Murray told the conference that accepting affordable rent would have trebled the rent for a two-bed flat in the borough and explained how it was insisting on social rent instead. Labour delegates went on to back a motion calling on the party to commit to a new programme of social housing programme, reject affordable rent and address security of tenure and above inflation rent rises in the social sector.

That was the visible part of what was happening on housing at the Labour conference. Away from the conference hall, countless fringe meetings on everything from garden cities to private renting (many of the same ones will be held at all three party conferences) provided indications of how policy is evolving. In  fairness, the midway point of a parliament is not really the time to expect the opposition to get too specific. As Robbie de Santos notes on his blog for Shelter, there are some promising indications of a party political arms race on housing.  Things certainly seem to be moving in the right direction on a number of fronts even if, as Chris Giles argues in the FT this morning, lack of real support for large-scale development is likely to mean a ‘small and expensive’ housing future.

However, in the meantime Labour’s welfare policy appears stuck in a depressing timewarp. Shadow work and pensions secretary Liam Byrne has been making the point in interviews all week that Labour needs to reinvent social security to respond to a shift in public opinion and growing resentment against benefit claimants by some sections of society. That means Labour will look to make further cuts in the welfare bill after 2015 and that Byrne supports the idea of a benefit cap provided it could be set differently in different parts of the country.

The problem with the last bit is that a total benefit cap is effectively a housing benefit cap because that is the thing that varies around the country – but we already have a whole series of housing benefit caps that vary by local area. Regional caps might look fairer on the surface but in reality they are an open invitation to Conservative welfare ultras who are advocating further reductions in the total cap as part of £10 billion more in welfare cuts.

And that raises the really big problem inherent in Byrne’s, and Labour’s, stance on welfare: they are so concerned with the shift in public opinion that they appear to be ignoring their own role in it. The evidence for the shift comes from the latest British Social Attitudes survey by the National Centre for Social Research. The proportion of people wanting more spending on benefits has fallen from 58 per cent in the last recession in 1991 to just 28 per cent now; the proportion worried that benefits are too low and causing hardship is down from 55 per cent in 1993 to just 19 per cent now. Here are two more examples of the general trend:

What’s particularly striking is that the fact that unemployment is at its highest for 15 years has had ‘little discernable impact’ on public attitudes: 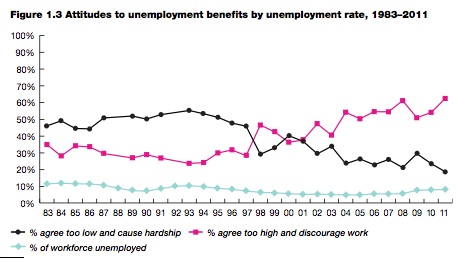 The graph shows a hardening in attitudes under the coalition but the gap really opened up under Labour after 1997. Coincidence? Probably not, according to the NatCen researchers. They argue that evidence from previous attitudes surveys shows that supporters of political parties who trust their party’s standpoints tend to adopt and replicate these when asked about their own views:

‘This tendency was especially noticeable under the 1997 to 2010 Labour government when attitudes among its supporters became markedly less pro-welfare as the party repositioned itself on issues such as equality and government intervention (Curtice, 2010). As a consequence, there are reasons to predict that opinion has not followed the pattern of previous recessions, because the public – under the long-term influence of Labour’s stance as well as that of the current coalition – has embraced a more tough-minded view of welfare than it held in the past.’

As Alex Marsh puts it on his blog, Byrne and Labour have a choice whether to be populist or progressive on welfare reform:

‘I suppose I might have expected a progressive politician of the left to argue something rather different alongside this. To make a vigorous case for the value of social protection, especially now. To argue that Labour should be setting a different agenda – to stand on the future side of the issue, if you will – and to challenge the stigmatisation of benefit recipients as feckless scroungers. To acknowledge that a more precarious labour market demands a more comprehensive response from the welfare system. Smarter and more flexible, certainly, but there to catch all those who fall on hard times. And I might expect them to temper their enthusiasm for getting people back in to work with an acknowledgement that there needs to be work for them to get back into, otherwise the risk of punishing the victim is high.

‘It isn’t clear that Byrne is doing any of these things. But then I’m not entirely sure he’s in the relevant category – that is, a progressive politician of the left – so perhaps it would be unfair of me to expect him to. What is clear, though, is that he is a populist politician of the highest order. Where the people are perceived to lead, however unenlightened and illiberal, we will follow.’

And so the party conference season moves on to the Conservatives in Birmingham next week. While the other two parties talk the talk on housing policy, the Conservatives in general and the pioneering Tories of Hammersmith and Fulham in particular are walking the walk. And while Liam Byrne takes his cue from public opinion on welfare, prepare to hear more about the next stage of the Conservative reform plan already signalled by David Cameron.