Accounting for the new self-employed

A report out today from the ONS confirms the big increase in self-employment in the UK seen since the start of the Global Financial Crisis. 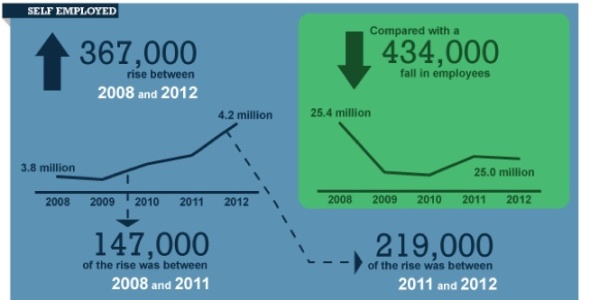 These are remarkable figures, especially when you consider, as the FT data blog points out, that self-employment has actually fallen in most other countries in the OECD.

So what’s going on? As I blogged last week, the shift could if anything be bigger than it looks because self-employment has actually fallen by 57,000 in construction, the industry where it is traditionally most prevalent.

One possible explanation came in a fascinating investigation on Radio 5 Live on Sunday (listen again here for the next four days) that revealed how private welfare to work contractors are steering claimants towards self-employment.

The programme began with examples from six different contractors but that had quickly grew to nine as listeners began to phone in with their own stories. Cases included a man advised to became an online poker player and a woman who was advised to start a business making cakes after saying her hobbies included baking. The motive seemed to be more cooking the books than baking cakes though: there seemed to be little or no consideration of whether the business idea was viable so long as the contractor could earn its bonus for getting them off job seeker’s allowance.

Equally, there appeared to be manipulation by contractors of the rules that mean some groups can be better off working a certain number of hours and qualifying for tax credits than being on JSA. A single parent told the programme she was encouraged to start her own gardening business and bend the rules by inventing work to make her week up to 16 hours in the winter.

Now there’s much to be said for self-employment as a route out of unemployment and some of this is not new. Plenty of people I know became comedians or artists or journalists courtesy of the enterprise allowance scheme in the 1980s even though it was seen at the time as a way of massaging the unemployment figures. I also know of at least one person who still makes his living out of online poker.

However, taken as a whole, the programme was deeply worrying on a number of levels. First, the advisors involved seemed to have a cynical disregard for the potential consequences for the claimants they were advising. Someone inventing hours to claim tax credits could easily find themselves pursued by HMRC and forced to repay the money and, as I highlighted in my previous blog, the part-time self-employed are about to get clobbered under the universal credit.

Second, it points up the obvious problem with contracting out welfare to work to private contractors and using payment by results. Inevitably they will find the system’s weakest point and exploit it for profit. In theory, the profit motive is meant to deliver more efficient results for society. In practice?

Taking the sector as a whole, the self-employed tend to be older than employees (47 against 40), they are more likely to be male (70 per cent against 51 per cent) and they work longer average hours (38 against 36). The commonest self-employed occupations are taxi drivers and chauffeurs, carpenters and joiners and ‘other’ construction trades.

However, the picture is very different if you just look at the last four years. Women accounted for 80 per cent of the 367,000 increase between 2008 and 2012 and most of the rise was in people working less than 30 hours a week. Broken down by age, the biggest increase came in people working beyond 65. As analysis for the TUC points out, the biggest increases have come in occupations like administrative and secretarial work, sales and customer service, and services like hairdressing, cleaning and caring.

2 Comments on “Accounting for the new self-employed”