How short-term lets have hollowed out the rental market

It’s the end of summer and the tourists are going home but the housing problems they leave behind are here to stay.

This time last year I write about the momentum behind moves to tackle the blight of second homes in Wales and in parts of England like Devon and Cornwall.

Second homes are not new in themselves but combine them with the rise of Airbnb and short-term lets and in many areas the problem for local people has become less finding an affordable rented home than finding a rented home at all.

Anecdotal evidence I’m hearing where I live in Cornwall suggests that these trends have got far worse in the last 12 months. In the process, more assumptions about housing are being turned on their head.

Just down the road from me, the landlord of a large house converted into flats has just given all the tenants two months’ notice. One has been there 17 years, a couple in their 70s have lived there more than 20 years, and they have always paid their rent on time, but none of that matters. The house is being converted into short-term holiday lets.

A seaside town in Cornwall is possibly an extreme example of the trend but problems with short-term lets are being reported all around the country and I can think of many more villages nearby where the situation is far worse, with communities full of second homes and Airbnbs and second homes and few full-time residents.

Tackling the blight of second homes

Originally published as a column for Inside Housing

As the staycation summer starts to draw to a close, spare a thought for everyone living in the places where the rest of us have been on holiday.

Coastal areas and beauty spots in the countryside are well used to tourists but this year has really brought home the impact of second homes, holiday lets and relocating buyers on housing for locals.

On the beach on the  Llyn peninsula in North Wales, the message is Hawl i Fyw Adra (the Right to Live at Home) while demonstrators have scaled the country’s highest mountains to protest that Nid yw Cymru ar Werth (Wales is not for Sale).

In the South West of England, there are persistent reports of Londoners snapping up homes they’ve seen online without even viewing them in person and of tenants being evicted to make way for lucrative holiday lets.

House prices beyond the reach of local wages and rents inflated by holiday lets have long been features of the market but a new development this year is an acute shortage of any homes for rent, let alone affordable ones.

A quick search on Rightmove for my home town in Cornwall reveals just four rentals listed all summer – a studio flat, two bedsits in an HMO and a retirement flat.

END_OF_DOCUMENT_TOKEN_TO_BE_REPLACED

Originally posted on May 9 on Inside Edge 2, my blog for Inside Housing

The May elections have a common theme when it comes to housing: can the winners really do what they say?

From Sadiq Khan to Marvin Rees, from Nicola Sturgeon to Carwyn Jones and from council leaders all over England to the voters of St Ives, winning the elections last week was the easy bit. The hard work starts now.

I’ll start with the poll closest to me: the referendum in St Ives on a Neighbourhood Plan that will ban the building of new second homes that has brought national attention.

More than 80% of residents supported the plan last Thursday and it’s impossible not to sympathise. Around a quarter of the homes in St Ives are either second homes or holiday lets and the problem is even worse in other Cornish communities. That does not just price out locals it also means a lack of year-round residents that makes it hard to sustain vital services and infrastructure.

END_OF_DOCUMENT_TOKEN_TO_BE_REPLACED

The rebel and the ponytail

When David Cameron and Nick Clegg are in town on two successive days you know that the election campaign is serious.

The battle for St Ives, the most southerly constituency in Britain stretching round from the Lizard to Land’s End and then out to the Isles of Scilly, is very close. And it is part of a wider struggle in Cornwall and the South West between the two coalition partners (though Labour does have seats in Exeter and Plymouth and hopes of more) that could have a big impact on the result next week. It’s one of the 23 seats the Tories need to win for an overall majority and one the Lib Dems must hold if they are to have a hope of influence in the next parliament.

St Ives is one of three Lib Dem seats in Cornwall, and 14 in the wider South West, that could be vulnerable. The Western Morning News reported on Wednesday that the Tories are now even targeting Yeovil (held by David Laws but former constituency of Paddy Ashdown) in a sign of rising confidence in the blue camp.

END_OF_DOCUMENT_TOKEN_TO_BE_REPLACED

Housing at the hustings

So is housing finally cutting through as an issue at this election? Yesterday has convinced me that it is.

The day started with housing featuring as the election issue of the day on Today on Radio 4 – good news in itself but just an indication of the programme’s agenda. The report by John Humphrys was about Shepherd’s Bush and how it’s changed from the setting for Steptoe & Son to a place where a couple on a joint income of over £100,000 cannot afford a deposit, let alone a home, and foreign investors are buying new apartments eight at a time.

An interview with Brandon Lewis and Emma Reynolds followed (listen again here at about 8.30). But it quickly degenerated into bald men squabbling over a comb mode as they traded statistics about who has the worst record in government. Lewis trotted out the usual lines about Help to Buy while Reynolds repeated her better ones about Lyons. Maybe I’ve heard it too many times before, maybe they’ve said the same thing too many times before, but it hardly seemed like housing was at the centre of the election. Depressingly, the focus was entirely on first-time buyers. They do face huge problems but this is an indication I think that the main parties still see home ownership as the issue on which elections are won and lost. It’s a sense of aspiration, rather than housing as such, that is the real issue.

That was enough to lower my expectations for my local hustings. BBC Cornwall is organising them across the county and last night it was the turn of St Ives. The Lib Dems held off the Conservatives by just 1,700 votes in 2010 and it’s one of the 23 seats the Tories need to win to form an overall majority.

END_OF_DOCUMENT_TOKEN_TO_BE_REPLACED

If the political weather turns out to be even half as good as the winter sunshine at Land’s End today, then Homes for Britain is set fair for success.

A rare national housing event happening up the road from me was too good an opportunity to miss so I was there at lunchtime for an event to mark the start of a baton relay that will make its way through the South West by bus in time for the campaign rally in London on March 17.

Hosted by around 30 different housing associations, progress will be marked in different towns and cities along the way with events including snakes and ladders in Bristol and school children making model houses in Witney (David Cameron’s constituency). Regional events are also happening in the North East, North West and Yorkshire & the Humber.

The relay will reach London for March 17 for what is being billed as ‘the biggest housing rally for a generation’ at Methodist Central Hall in Westminster and that will be followed by a billboard campaign in April.

The housing problems of the South West will be highlighted along the way. As Simon Nunn, assistant director of external affairs at the National Housing Federation, told the Land’s End launch, house prices cost 11 times average earnings in Cornwall. You need earnings of £50,000 to buy an average home on an 80 per cent mortgage and £40,000 to buy a lower quartile home. Mean earnings are below £20,000.

Backing his call for action were representatives from housing associations and other organisations across the region, pictured here with the Betsy, the Routemaster bus that will make the trip to the capital: 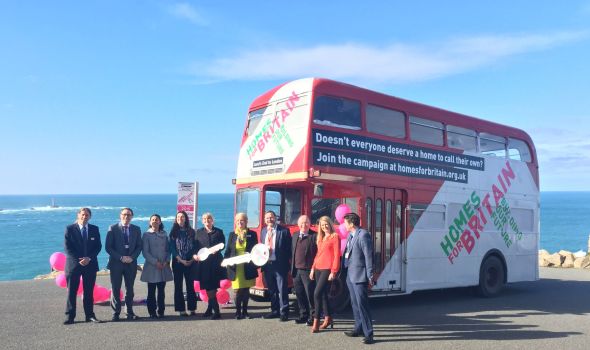 Chance of a lifetime

MPs will get the chance to back major housing reforms including new significant exemptions to the bedroom tax later this year. Will they take it?

Andrew George, the Liberal Democrat MP for St Ives, has what he describes as ‘the chance of a lifetime’ to change things through legislation after coming first in the ballot for private member’s bills. Talking to him yesterday gave me a fascinating but slightly depressing insight into how the system – and party politics – work.

He consulted his constituents on a shortlist of options including housing, a Cornish Assembly and health care standards and after more than 2,000 comments has decided to plump for an Affordable Homes Bill with four key elements:

A quick rant about train lines and climate change 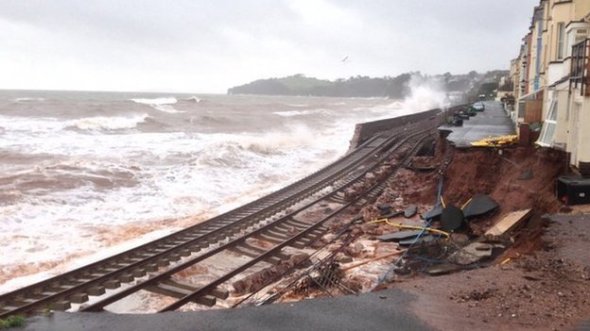 It may not be conclusive proof that climate change exists but the sight of the rails on the main train line to the South West suspended in mid air above the sea seems a pretty fair indication of it.

If you’ve never taken the train to Devon and Cornwall, the stretch around Dawlish and Teignmouth is possibly the most scenic in the whole country (the only rival I can think of is the Kyle of Localsh line in the Highlands). The views are breathtaking as the train runs directly above the beach, only metres above sea level, and beneath distinctive red cliffs.

Unfortunately, that means it is also one of the most vulnerable in the UK too. Landslips on the cliffs around Teignmouth and damage from storm surges have happened with depressing regularity but this is the first time I can remember the sea breaching the sea wall at Dawlish.