Questions that will not go away

Originally posted on March 31 as a blog for Inside Housing.

Some time in the long distant past (two weeks ago) we were just emerging from a Budget that signalled better times ahead for affordable housing but left a string of unanswered questions ahead of the Spending Review in the Autumn.

Nest week should have seen the launch of the UK Housing Review 2020 but it appears virtually instead this week in our newly shrunken world as a powerful reminder that other things once mattered.

As ever, it combines a wealth of authoritative statistics about housing with in-depth analysis of all tenures as well as finance, the economy, homelessness, help with housing costs and international comparisons.

What really struck me me is the picture that emerges of the state of our affordable housing and the stark contrast between England and the other UK nations that has developed over the last ten years. This is not new of course but seeing it all brought together is what really hits home.

END_OF_DOCUMENT_TOKEN_TO_BE_REPLACED

What – and who – is social housing for?

Originally published on March 21 on my blog for Inside Housing.

I’ve lost count of the number of inquiries taking place into the future of social housing.

Sajid Javid wanted his forthcoming green paper to ‘kick off a nationwide conversation’ only to see Alok Sharma reshuffled in the middle of hearing what tenants had to say.

But the conversation is at least taking place. Whether it’s Labour, the Chartered Institute of Housing, Shelter or similar initiatives in the devolved nations, everyone is set to have their say.

The content will range far and wide from governance to safety, quality to quantity and accountability to tenants’ rights but there are also basic questions to be answered about what and who social housing is for.

Some vital context for this comes in the latest edition of the UK Housing Review published on Wednesday.

END_OF_DOCUMENT_TOKEN_TO_BE_REPLACED

Where the money really goes in housing

Three comparisons leap out from the latest edition of the indispensable UK Housing Review published on Wednesday.

The first two are not new in themselves and the third is only a crude estimate but all three need repeating again and again for a real appreciation of where spending on housing goes and exactly who is subsidising who.

First comes the main one highlighted by the Chartered Institute of Housing (CIH): the shift from bricks and mortar to personal subsidies, or from grants for new homes and repairs to old ones to housing benefit.

This series of pie charts from the Review shows the change over the last 40 years and the total amount of housing subsidies in real terms: 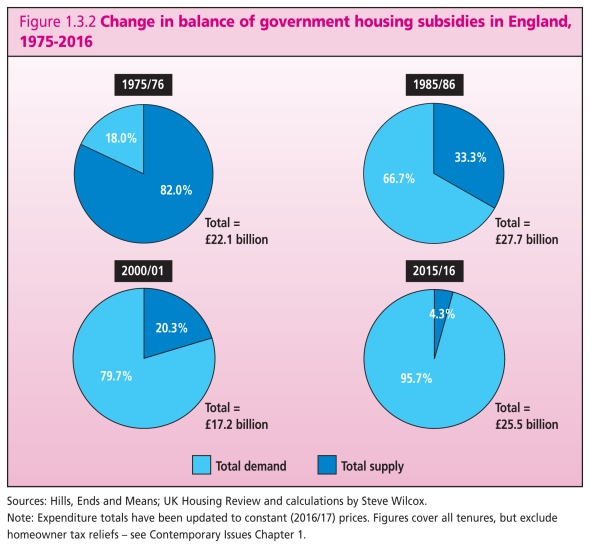 Note first that supply subsidies have sunk to just 4.3 per cent of the total pie – this despite all the cuts in housing benefit seen since 2010 and the fact that the figures to not include continuing tax reliefs for home owners (see below for more on that).

Second, note that this does not save money. Total subsidies are now 48 per cent higher in real terms than at the turn of the century (when admittedly social housing investment was very low) but they are also approaching the levels of 30 years ago (when investment was significantly higher and the unemployment rate was three times what it is now).

END_OF_DOCUMENT_TOKEN_TO_BE_REPLACED

What a way to run a housing system

Originally posted on September 14 as a column for Inside Housing.

The balance of funding between government funding for home ownership and affordable housing schemes continues to astonish even after the change in emphasis under Theresa May.

Revised figures prepared for Thursday’s publication of the UK Housing Review Briefing Paper show that total support for the private market up to 2020/21 is set to total £32 bn compared to support for affordable housing investment of just £8.6 bn. 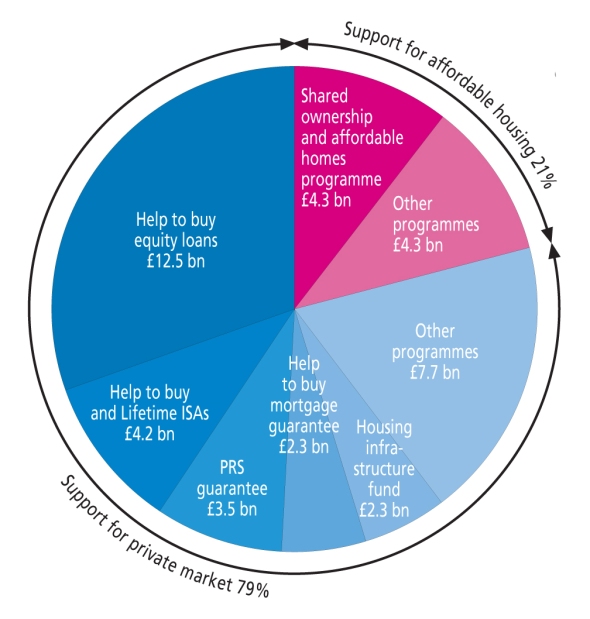 These are revised figures that take account of the extra money for affordable housing announced by chancellor Philip Hammond last November. Even after that, even after adjustments for lower than expected spending on mortgage guarantees, and even including the Right to Buy pilot in the pink part of the graph, we are still spending £4 on support for the private market for every £1 we spend on support for affordable housing.

What really leapt off the page at me in this chart was that the government is set to spend £4.2 bn on Help to Buy and Lifetime Individual Savings Accounts (ISAs) over the same period as it spends £4.3 bn on the main Shared Ownership and Affordable Homes programme.

END_OF_DOCUMENT_TOKEN_TO_BE_REPLACED

The turn of the screw

Originally posted on April 4 on Inside Edge 2, my blog for Inside Housing

You’d never guess it from the sound of the violins playing for Buy to Let but there were other significant changes to benefits and tax on housing this month.

As ‘investors’ rushed to beat the April 1 deadline for higher rates of stamp duty on second homes, the orchestra reached a crescendo after new affordability tests were proposed by the Bank of England.

All that noise meant much less was heard about their tenants facing up to the first year of an unprecedented four-year freeze in their local housing allowance and other benefits and tax credits.

After three years in which LHA increases were restricted to 1 per cent, housing benefit rates for private tenants will now stay the same until 2020. Whatever the problems faced by their landlords, that means tenants will inevitably see rising shortfalls between their benefit and their rent. Equally inevitably, you would think, evictions will rise.